Players are amazed at Riot’s latest plans. Why?

A few hours ago an article appeared about who will soon be buffed and who will be weakened – LoL Patch 11.9 – Who will get nerfs and who gets buffs? It was to be expected. Players have noticed that Lulu has appeared on the list, and according to statistics, she is doing really well at the moment.

It is true that buffs have not been revealed yet, but it is known that the champion will be strengthened at least a little. Why is this so surprising to players? It’s worth taking a look at this character’s statistics.

READ MORE
Rylai’s Crystal Scepter from LoL should be changed? What do players think?

The situation of buffs not understood by the community is not new. It happened for example with Vladimir and Diana, who are currently the owning League of Legends. After buffing these two champions, the studio has already confirmed their nerfs. It only took a few days for the characters to become OP, winning the most matches of any other mid-lane character.

Now it’s time for Lulu. How is the sympathetic Yordl doing in the game right now?

According to the website lolalytics.com, the heroine is currently one of the best supports. Considering the statistics for the Platinum+ division, it is in tier S and currently wins over 51% of games. More interestingly, in terms of pick ratio, she is the second most picked support champion after Thresh. Such statistics are impressive. 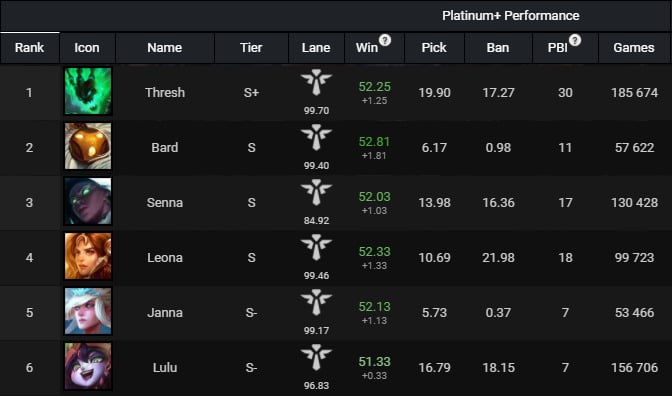 Lulu is extremely useful to her team, not only because she can effectively shield her allies with a shield from her E or ultimate, but is also known for her annoying crowd control, especially due to polymorphism.

It is worth going to the description of the items that are built on the mentioned character. Apart from the fact that items such as Ardent Censer or Staff of Flowing Water will be a good choice, one of the most important of them is the mythical item – Moonstone Renewer. What’s more interesting, according to the description of the latest update – it will also receive a boost.

Players are surprised that Riot decided to take such steps. There are many opinions on the Internet that Lulu will become the second Vladimir.

Lulu is the best enchanter in the game right now , she’s getting buffed while also getting her mythic buffed next patch

This is what happened to Vlad pretty last patch he was around a 49 – 50 percent wr they buffed him while also buffing his mythic which made him into a 53 to 54 percent wr champ and now they are nerfing him. (statistics from lolalytics.com).

It is difficult to say how the planned buffs will affect Lulu. Worth noting is the fact that specific statistics have not been given so far, so it is possible that the buff will be small. It only remains to wait for further information from Riot.