Riot has announced a number of changes to the League of Legends interface. Completely new things will be introduced, and some elements will change significantly.

Three novelties seem to be the most important. Officially, Riot describes it like this: 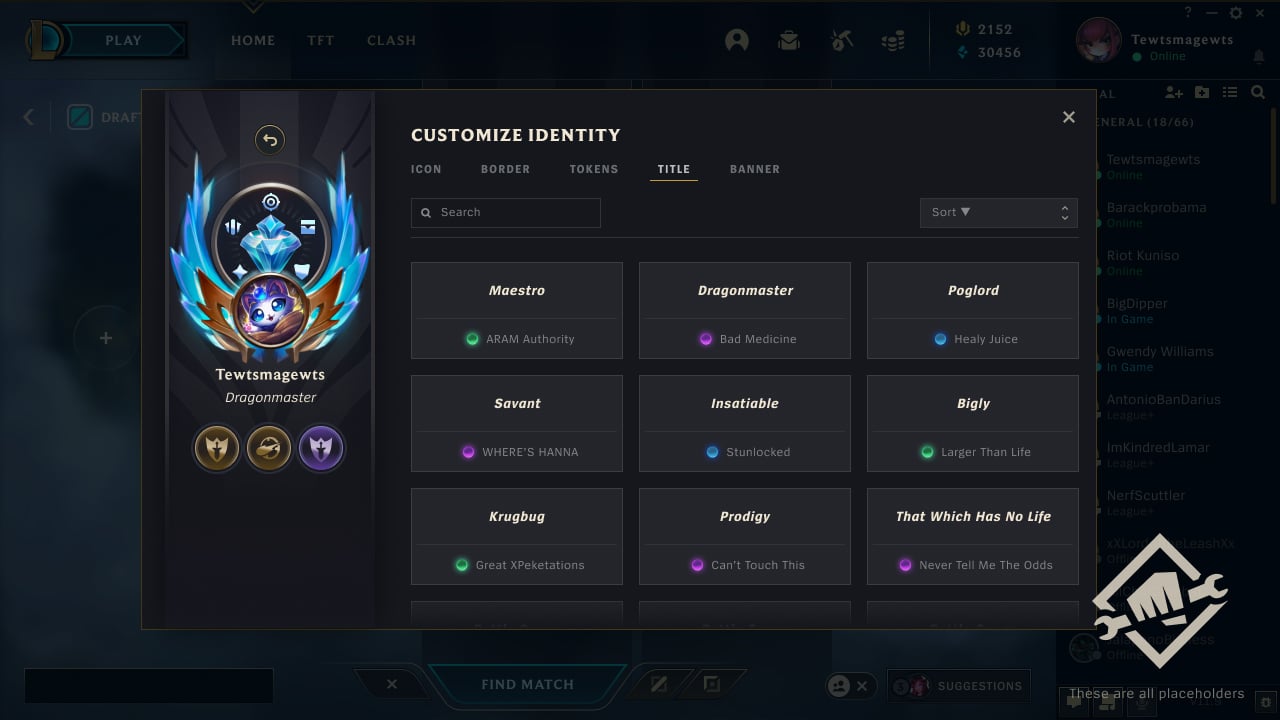 What else is Riot testing? There is a lot of it, so grab some tea:

In striving to give you the best Progression Identity choices that fit their needs from a myriad of available possibilities, we’re looking at updating our current roster of personalization elements with the following considerations in mind:

What We Have In The Works

We’re looking at some of the following adaptations later this year and beyond directly related to the current Progression Identity components as well as new system content.

Identity Customization: It’s been years since we integrated Ranked Regalia and Prestige Level changes to the League ecosystem, and we still haven’t provided a way to clearly select some of the borders that fit you the best. By the end of this year, we’re targeting the release of full identity customization. This will allow players to pick the borders, icons, and a few new personalization options being developed alongside our TBD new systems. 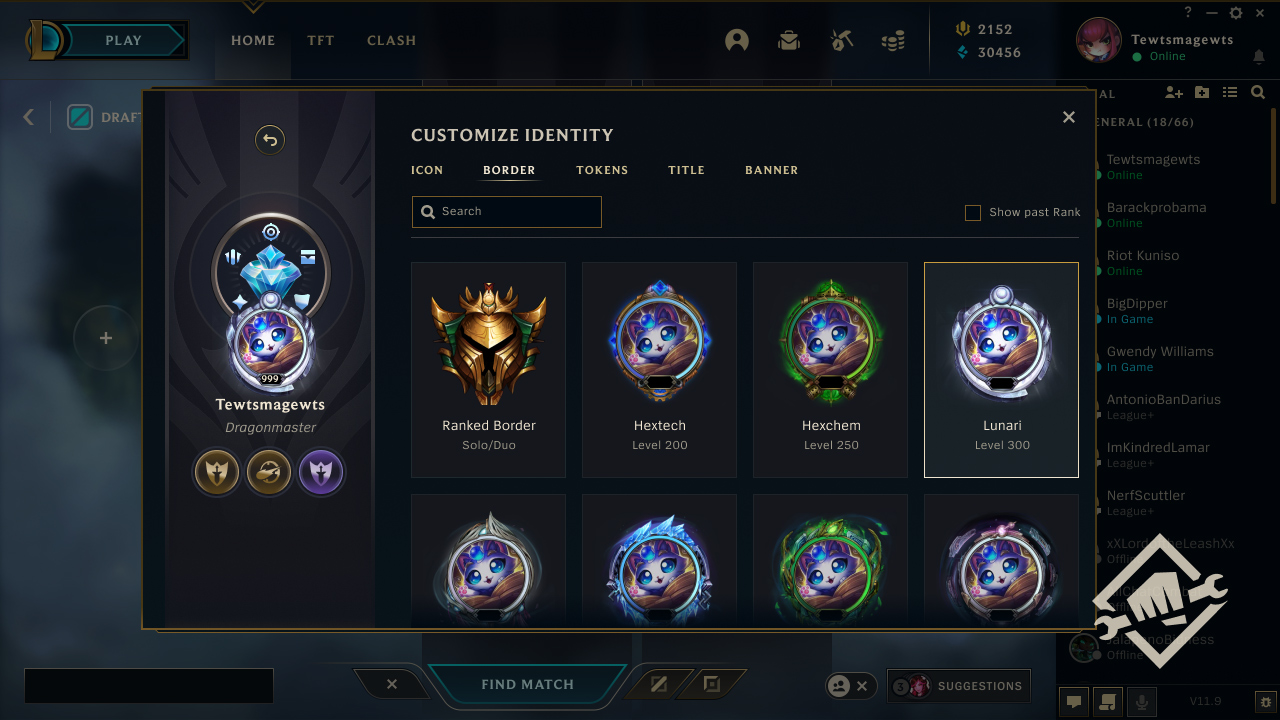 UI Updates to Gameflow: Alongside some fairly large system introductions to the in-and-around-game experience, we wanted to clean up some of the old and untouched styles throughout our gameflow screens: lobby, loading screen, and end-of-game. In doing so, we can bring our aging art style into 2021 and carve out some space for some new and unique content types.

In the below proposed concept, you can see a large influence of the old style in the lobby with map accents and background images remaining relatively untouched. However, we’re also trying to reduce the noise of some of the more distinct elements like unused banners in gameflow screens and clunky footer UI in the client to focus on identity components that allow you to stand-out when you’re queued up with friends, teammates, or just loading into game. 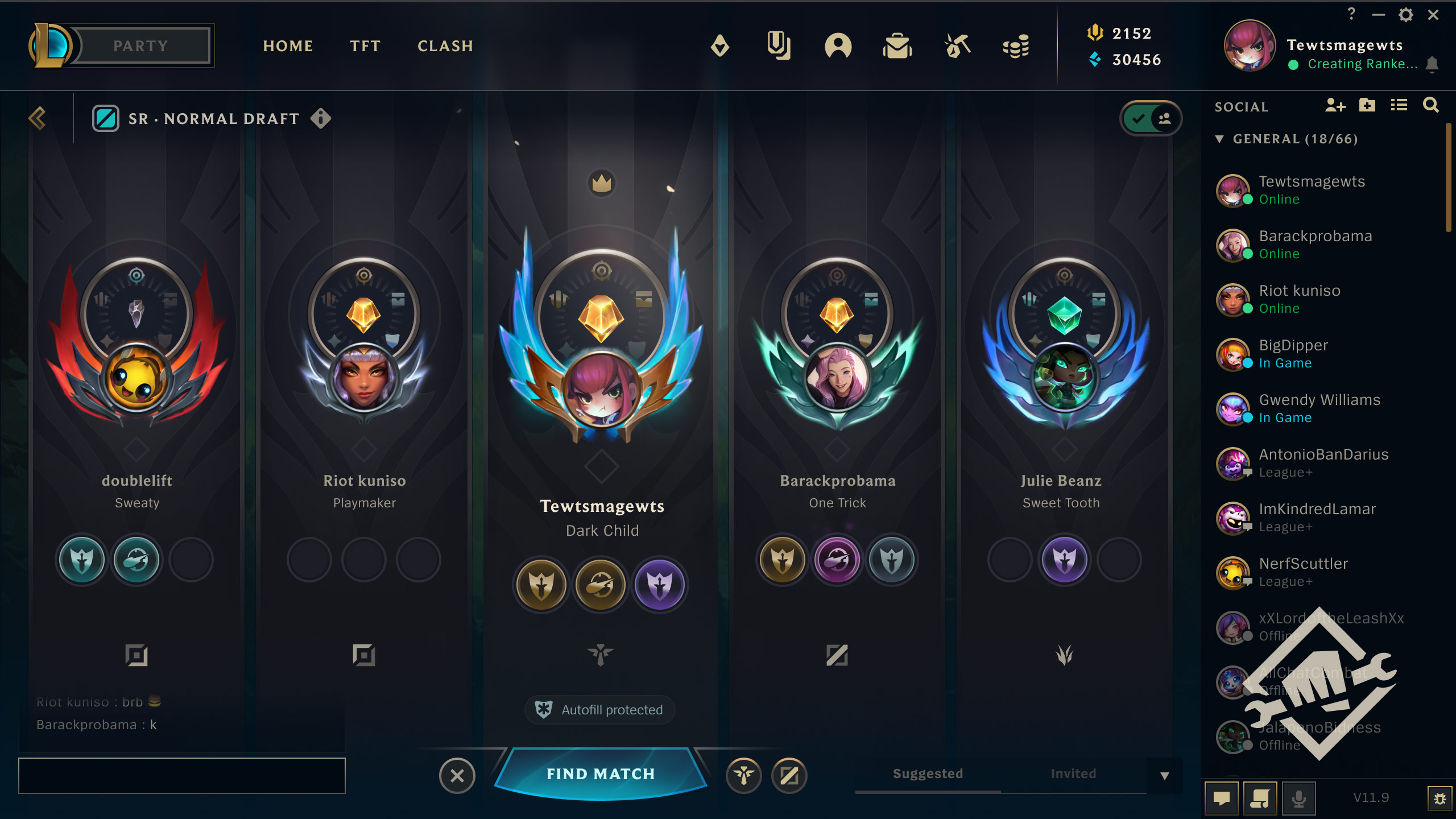 Above: In this screen we’re toying with different concepts of how a player can see themselves and others in the lobby screen. You’ll notice exploration of different ranked tiers and prestige levels accented by new crystals and tokens to really customize how others see you.

It is our hope that by focusing on clear core identity features like ranked emblems, level, name, and icons first, we can bring the rest of the client or around-game experience up to par a little ways down the line with limited additional effort. This lets you express who you are on the Rift earlier.

Ranked Emblems and Regalia: In many ways Ranked achievement is seen as synonymous with your core League of Legends identity. The metallic borders and intricate helmets have become a standard for competitive prowess and players who have reached their tough milestones are celebrated in a universally recognizable way.

As such, when approaching what an updated style of Ranked identity looks like, our primary goal is to make sure that we’re not diminishing the sense of value and achievement, no matter what the tier. Additionally, we’re being very careful to explore options that retain the recognizability of the tiering at a glance and ensuring that the older, intricate, metallic style translates seamlessly into something equally as impressive.

In this potential design, we’re attempting to remove the complex texture and faction alignment that you see with current regalia options. Though simple in approach, removing the texture and faction element allows us to be able to build on top of Ranked tiers further as a core piece of your identity. Moving more towards the emblematic wing shape will allow for some re-usability across the game experience and combination with other gameplay systems to tell a more complete player story.

It is the intent of these concept explorations to drive what we think is the next direction for identity as a whole—with a careful and clear nod to the past iterations. You’ll see in this direction that though we’ve replaced the helmet shape, we still get the overall feeling of the regalia’s core with a new energy showing growth radiating from the metal.

Prestige Levels: Prestige Level borders are something that held a lot of promise artistically, but when it came to customization, we dropped the ball. Players that had earned something that they had felt resonated with them were no longer able to display that content when they achieved a new prestige tier. First, we’d like to rectify that situation by allowing players to select any of the level borders they feel resonate with them. In addition to that, we’re exploring a world where these levels also move in a similar direction to ranked in the form of wing elements to be transferable across all the places identity is surfaced. What success looks like here is a refined solution that doesn’t lose any of the quality of the previous iteration and compete with other identity features in a detrimental way.

Before and (Potentially) After

We’re excited to have the opportunity to talk about these changes rather early in the process. This allows us to not only gather your feedback about the direction, but also sets the stage for other conversations as we get closer to some of these changes going live.

Speaking of feedback, tag us on @loldev on Twitter with any and all thoughts on what we’ve shown here today! Though please note, the concepts we’re showing here are very much works in progress. But our artists and development teams are eager to deliver the right experience here, so constructive feedback and discussion is welcomed.

As always, see you on the Rift!