Riot knew full well that Update 11.12 would shake bot lane balance, but the buffs were made anyway.

Today Riot admits that Ziggs “finally crossed the line.” In fact, it was hard to miss. The changes in patch 11.12 made this champion:

The developers know they have a problem, but interestingly, Ziggs escaped from further nerfs. We won’t find any nerfs in patch 11.15.

READ MORE
How much has LoL changed in the last 4 years? The player shows that the same heroes still reign supreme

Ziggs was primarily associated with Mid lane, but it was BOT that made the character land in the TOP 4 heroes with the highest winrate. And that’s after the nerfs from patch 11.14.

Did Riot create a monster? Such theories appeared after Update 11.12. Let’s recall what the studio did:

Ziggs hasn’t been around much lately, so we’re tossing him a bomb bone by strengthening his Q to spike harder in mid game. More importantly, we’re giving his ult a significant speed buff. This should make it more reliable when casting from long ranges while strengthening his powerful AoE damage in teamfights.

Riot writes about crossing the line, and in fact, it’s hard not to notice that something strange happened in bot lane. Ziggs has probably never been as popular there as in recent weeks. “Probably”, because the history of the pages does not allow looking back, for example, 8 years.

Overall, he is still a very strong figure at this point, as the charts show.

Now the question is how Riot will continue to respond. Expect indirect nerfs that will affect Ziggs. For now, this is a good hero that may surprise you. It is used by players on all servers. 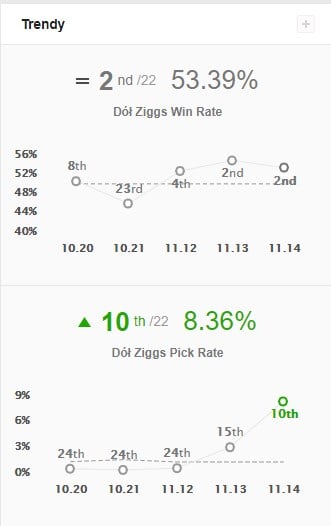 In Korea, he is in second place when it comes to the bottom line, and before big nerfs, this is unlikely to change.