Professional matches data will be deleted? Big concerns of the LoL community.

A few days ago, the League of Legends community learned about the likely removal of data from pro matches.

Although they are only to be limited, for now, it is possible that they will no longer be available on external sites entirely.

Two days ago, the lead analyst at Schalke 04 posted two tweets in which he informed the community about changes to ACS – the system that is responsible for displaying matches on websites. It turns out that this one will be gradually turned off and it is possible that it will actually disappear.

Tim Sevenhuysen also commented on the subject. He noted that if this happens without any alternative, many people will have a much more difficult job. Namely, it is about analysts, professional players, journalists, and e-sports fans. 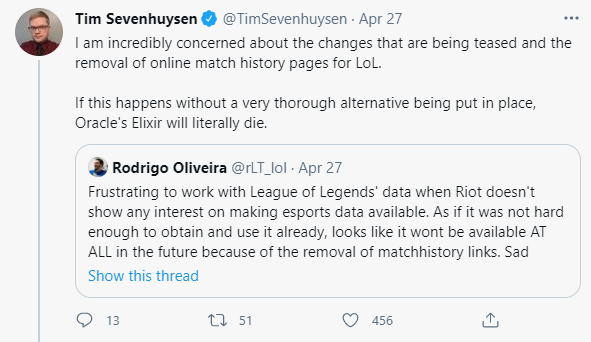 ALSO – Riot is responding, will it bring more Ixtal champions to League of Legends?

Perhaps, as gamers speculate, Riot Games wants to obtain this data exclusively to enter it on the official website lolesports.com, in paid form.

Some people even go a step further and have serious concerns that we will encounter a similar practice in the ranking queues. The match history will be available only in the client or on the Riot websites, and we may have to pay for checking our ally’s games.

At the moment, this only applies to professionals, and sites like gol.gg and lol.fandom.com have to be concerned.