Some members of the community claim that one of the items from the League of Legends should be reworked.

Rylai’s Crystal Scepter is a fairly well-known game item that offers the player not only skill power but also additional health points. However, this is not its most characteristic feature. What distinguishes the said Scepter is that the skills of its hero slow down enemies.

Unfortunately, according to some players, the item is not very popular and some people say that they prefer to omit it in favor of more useful items. Should Riot do something about it?

It is worth reminding how exactly this item works. From his description you can read that:

Some players have noticed that Rylai’s Staff doesn’t appear in too many games. One of them described seeing him practically only in two characters.

Rylai’s Crystal Scepter should be buffed / changed to make it useful. As of right now only 2 champions build this item Mordekaiser and Singed and even then they really aren’t able to build it since they want demonic embrace + rift maker

The player noted that Rylai could be a good item to counter items that speed up enemies, such as Turbo Chemtank. Unfortunately, for some reason, many players do not build the Staff, as they find no reason to choose it and give up other, better items.

Commentators noted that Rylai also performed well on other characters such as Aurelion, Malzahar, and Cassiopeia. Unfortunately, as you can read from some of the comments – the game often ends before it’s time to buy the said item.

One of the players presented a graphic that tells about who the Rylai’s Crystal Scepter is most often bought for. You can learn from it that Aurelion, Singed, and Malzahar are in the top group. Although the graphic shows 16 champions, many percent of Scepter purchases are really small. 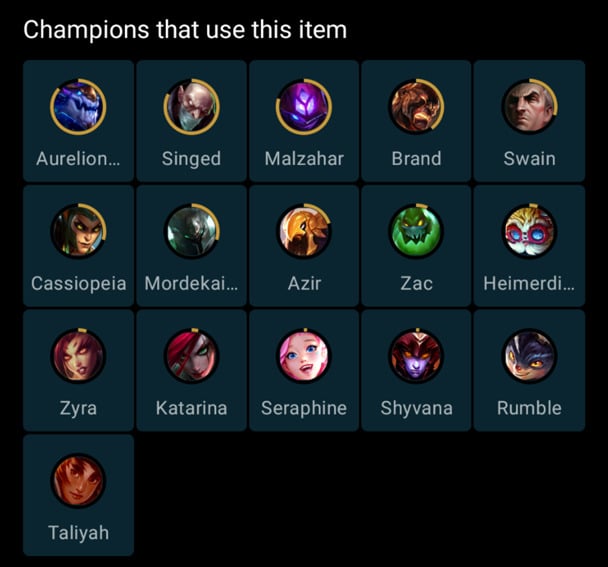 What could Riot do about it? It is difficult to clearly define what should be improved to increase the popularity of the item. At the same time, it should not become too strong and turn the finish line upside down. As we all know – too strong items often spoiled the game for many players.