One of the most important events in the history of the game is heading to League of Legends.

In January of this year, Viego – The Ruined King was added to LoL. This was announced to be the beginning of what would soon be happening in the world of Runeterra.

Players will soon be able to take an active part in the fight against ruin during the Sentinels of Light 2021 event. What is known about the pass, which is now available, and how are the missions presented?

The Sentinels have stood vigil against the Black Mist for a millennium, containing the corrupting clouds that threaten Runeterra’s shores with each new generation. But while time has depleted their ranks, their undying enemies on the Shadow Isles have only grown stronger. Now their hidden war has spilled from the shadows and floods across the continent, the unending waves of darkness heralding their final test.

The Ruined King has returned, and only the Sentinels can stop him.

Rise of the Sentinels

Runeterra has fallen, but the light is not yet lost.

The Sentinels are launching their final campaign against the Black Mist, and they’re going to need all the help they can get—that includes you, Rookie! Join Senna and Lucian as they travel across the continent, recruiting anybody who join their side in the final stand-off against Viego, the Ruined King.

Much like the Sentinels themselves, you must forge your own path through the darkness.

But that doesn’t mean you have to go in blind! Here are a few tips to help you on your way:

Now that you have an idea of what you’re facing, let’s see what lies ahead. 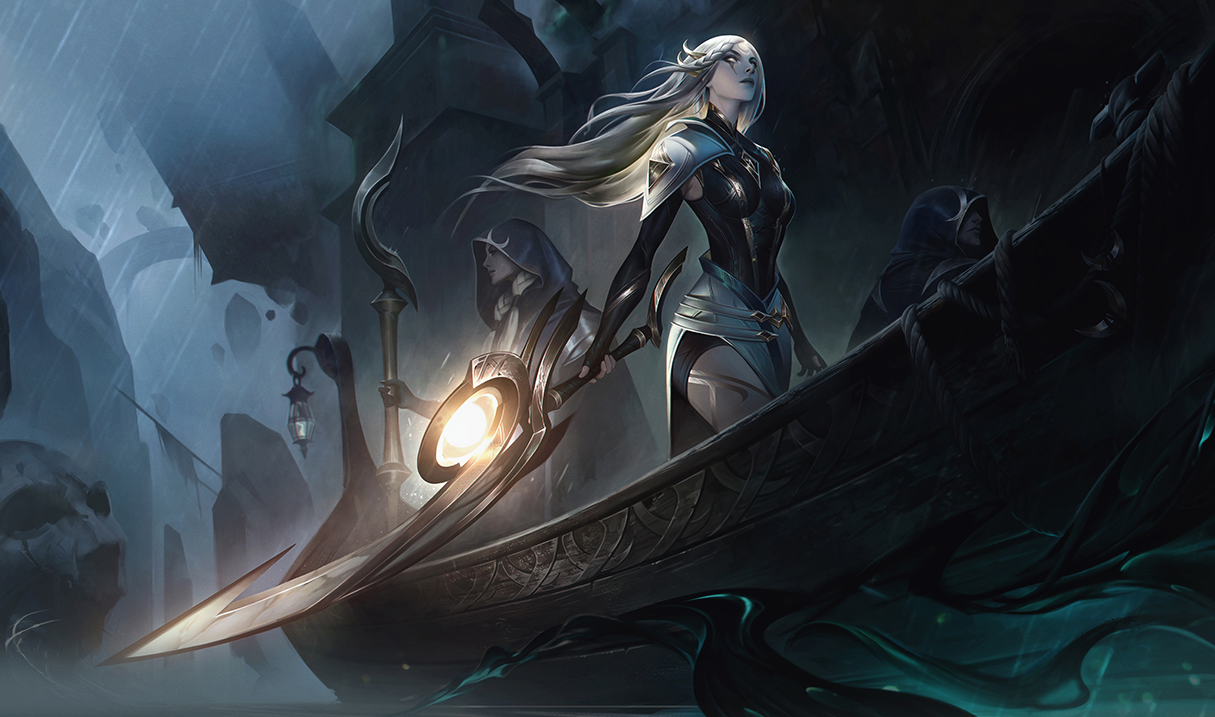 As time goes on, the Sentinels will push through new regions, opening them up to players and adding to their ranks along the way. While some regions must be visited first (Demacia, Piltover & Zaun), others present a choice that will affect your rewards and which Sentinel you recruit. In these instances, the region visited first is marked with an A, while the region visited second will be marked with a B.

While you’ll still end up with essentially the same roster at the end, your decisions can have a real impact on the champions you recruit. Some of them will be changed in small ways depending on the results of your choices. This is reflected in the adjective before their name (Defiant Riven vs Reforged Riven, for instance), and also changes the mechanics of how champions earn you points, which help you progress across the map and through the event.

Read on to learn more!

The Sentinels may be united under a single banner, but their skills and motives couldn’t be any more different. That’s why each new recruit you add to your ranks will come with their own objectives. But as the stakes increase over time, so do the points they can earn from achieving those objectives, allowing even late additions to the cause to have a chance of saving Runeterra!

Looking to score a few extra points every game? Champion the cause by equipping a Sentinel or Ruined skin when you queue up!

This bonus only applies to champions who joined the Sentinels or were Ruined after the event began, so the base skins for Senna, Lucian, Gwen, Akshan, Thresh, and Viego will not earn you extra points! 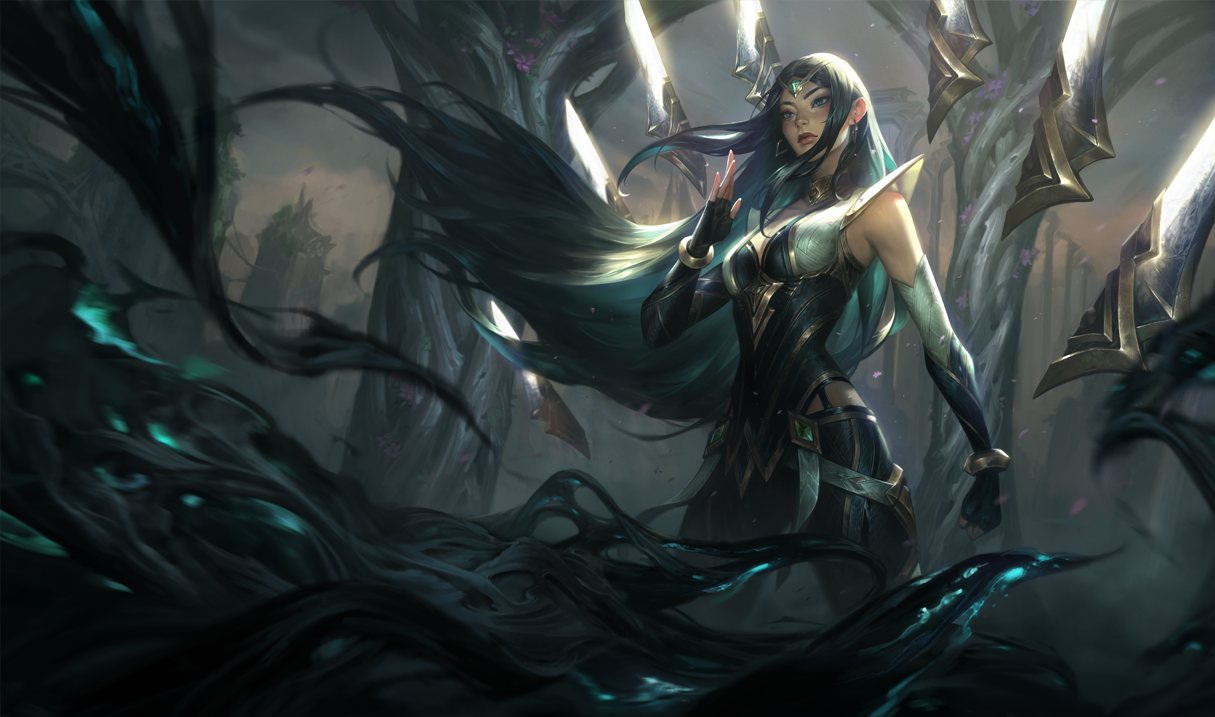 As your team comes together, you’ll have the opportunity to earn even more points by achieving special objectives related to your roster, starting from week 3. Just remember: these are optional tasks meant to give you a little point boost in certain situations. You won’t miss out on any rewards if you don’t complete them.

Now that you know how to get points, let’s see what you can get with them! 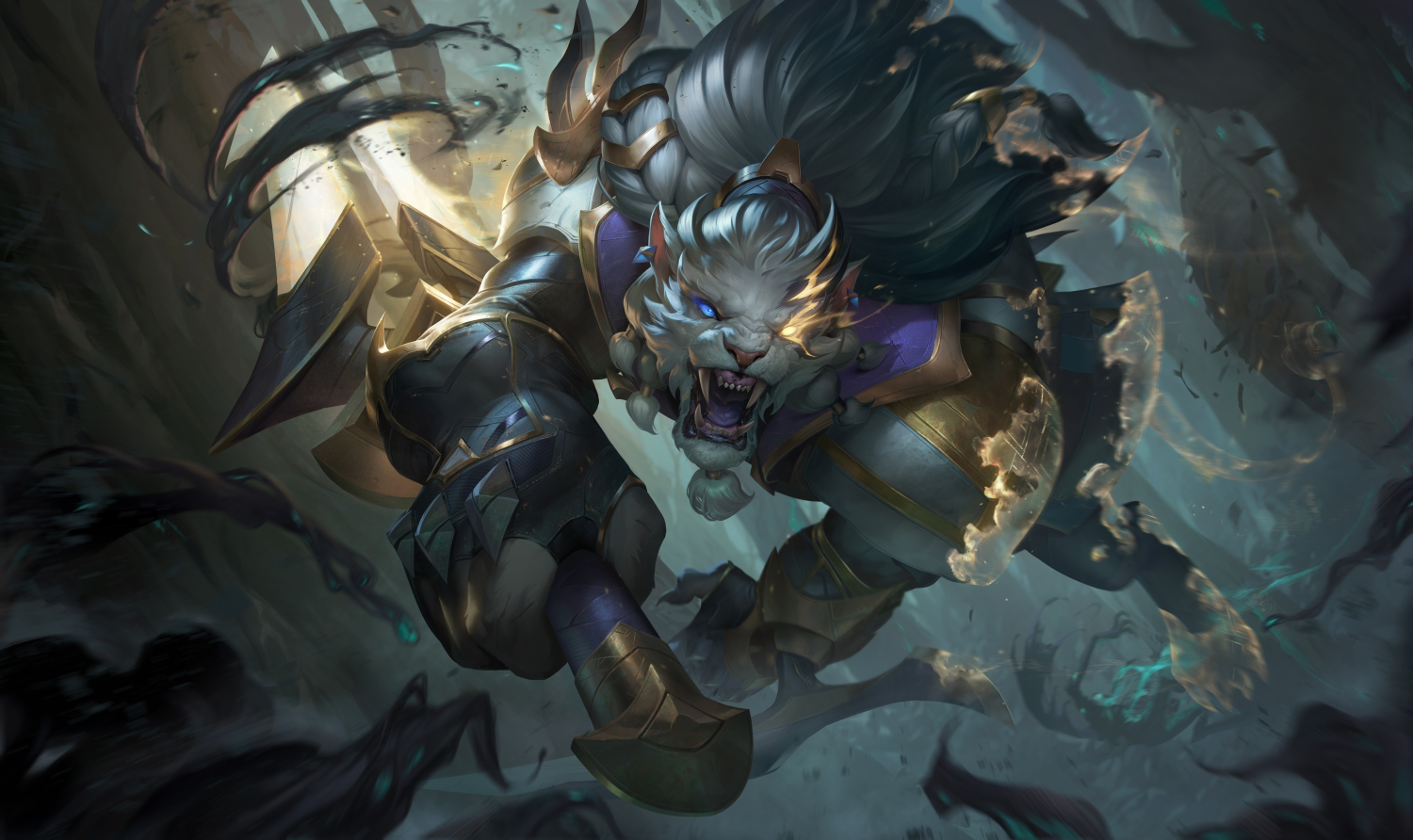 While each new Sentinel is arguably your most valuable reward for completing a region, you can earn more and greater rewards for climbing each region’s tiers by earning more points.

Okay, Rookie—we’ve taught you everything we know. The rest is in your hands. Good luck!

Saving the world has a price. The Sentinels Pass can be purchased for 1650 RP, and it comes with 200 Tokens, 4 Ruined Orbs, and the Sentinels of Light Pass Icon.

We’re also offering a Sentinels Pass Bundle for 2650 RP. This bundle includes all the items mentioned above, plus Pantheon, the new Ruined Pantheon skin, and the Ruined Pantheon icon border. How will the Sentinels stop a man who has defeated gods?

Completing these missions might just give you the edge you need to vanquish Viego once and for all!

Each Milestone requires you to score 15 points, which can be earned by winning (5 points) or even losing (2 points) any matchmade game.

If you’re going to beat the Black Mist, then you’ll want to stock up on Tokens!

Tokens are only given for games against other players!

Every time you win in Summoner’s Rift, ARAM, Ultimate Spellbook, or TFT (placing in the top 4), you’ll earn 5 points. But don’t worry—even if you’re on the losing team (or if you’ve placed in the bottom 4 in TFT), you’ll still earn 2 points.

The Ruined King has bolstered his forces with corrupted champions, forcing the Sentinels to answer with new recruits of their own. Look below to see how you can add members from both sides to your roster.

Everyone’s favorite berserker is wielding his dual axes in the name of charity! From July 8–August 9, Riot will contribute 100% of proceeds from the Sentinel Olaf charity bundles and select related items (anything marked with a ♥!) to the Riot Games Social Impact Fund!

Players interested in maximizing the bang of their charitable buck should look no further than the Sentinel Olaf Charity All-Star Bundle, which can be purchased for 7130 RP and includes three emotes (Sentinel Crest, So Proud, and I Got You!), Olaf (the champion), and the Sentinel Olaf skin, along with all his chromas and the border icon!

If the world’s going to stand a chance, then the light is going to need a little help. Field a full team of Sentinels in record time with the Sentinel Mega Bundle, which includes Vayne, Irelia, Diana, Riven, and Pantheon, along with their Sentinel/Ruined skins and icon borders, and even a Sentinels Ward for 12445 RP(or 10290 RP if you already own all the champions). Discounts will be applied should you already own some, or all, of these champions.

Most of the Chromas coming out for this release cost 290 RP, except for Sentinel Olaf♥ (330 RP). Note that some chromas can only be found in specific ways, such as through loot or as influencer exclusives.

Just because you’re fighting for a righteous cause doesn’t mean you have to play fair. Grab a bundle and let your light shine even brighter!

Each Ruined Orb or Sentinels Orb contains 1 random skin shard and multiplies your Gemstone and Mythic Skin permanent drop rates by 1.5. Plus they grant a 3.5% chance to drop a Bag (Siege Bag or Resolve Bag, respectively), which have a +1% bonus chance for a random skin permanent and grant the following:

When you’re locked in a mortal battle between light and dark, a well-timed Pack can make a world of different! Packs are exclusive to the 50 Orb Bundles, and grants you one of the following:

Being a Sentinel means standing against the darkness, any time, any place. If you’re ready to take the good fight to the real world, then come join the Sentinels Initiative!

Much like the Sentinels, we must always strive to light the way to a better future. By joining The Sentinels Initiative, our latest social impact campaign, you can nominate a cause and/or nonprofit for grant funding from the Riot Games Social Impact Fund. You’ll also have an opportunity to share why your cause or nonprofit matters to your community. Have a tale to tell? We want to hear it! More of a visual storyteller? Submit a picture or video! Every submission has the chance of inspiring more nominations, but the top 30 will also win a $10,000 grant from the Riot Games Social Impact Fund for their charity or cause!

But the Sentinels Initiative is only the beginning! Because this year you can also raise money for charity by completing in-game challenges in League of Legends: Wild Rift, Teamfight Tactics, and Legends of Runeterra.

For every 1 million points that players contribute to the Drive Pool, we’ll donate an extra $100,000. Together we can raise up to $4 million for charity! 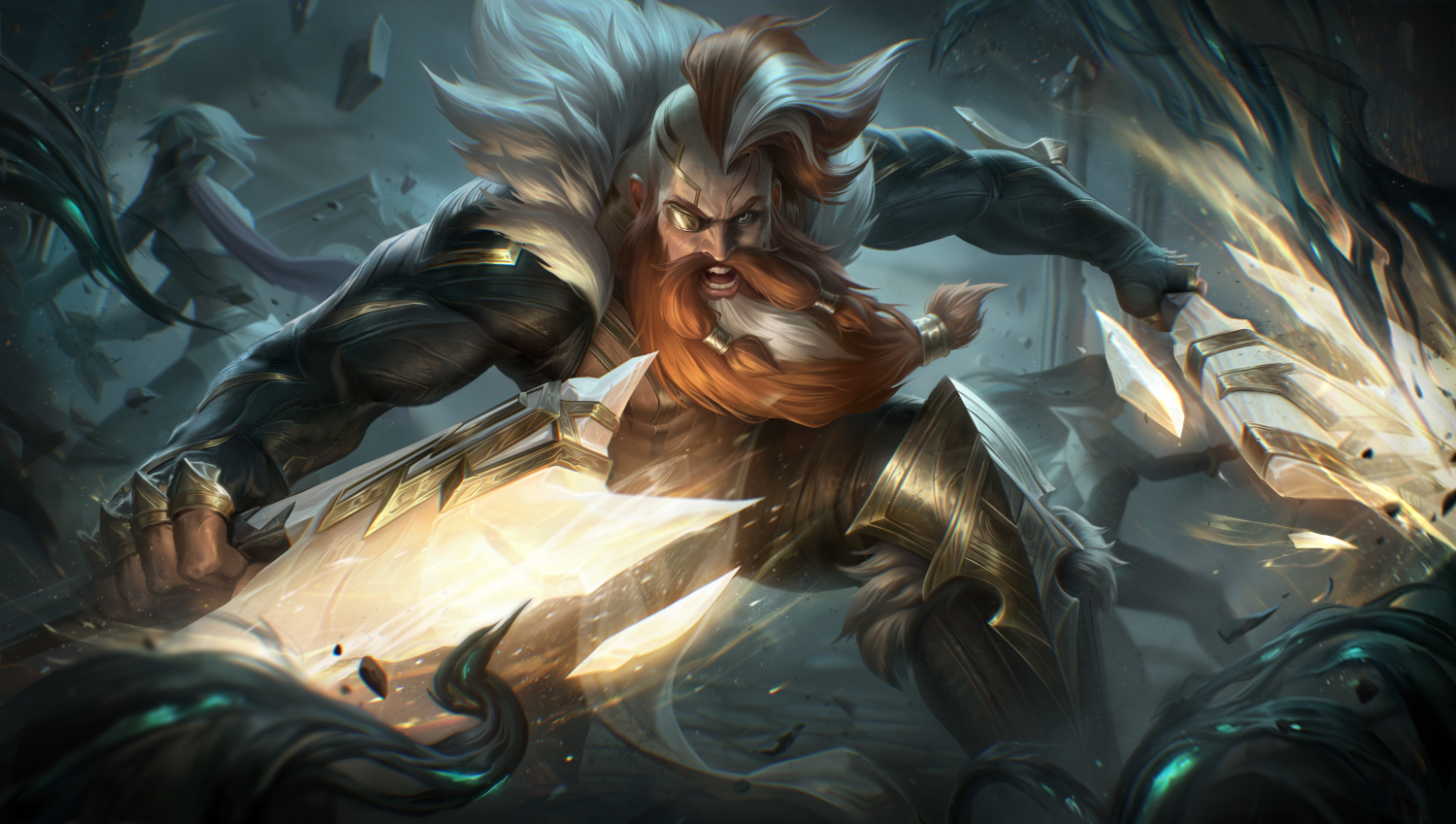 Sentinel Olaf is our newest charity skin for League PC. From July 8–August 9, Riot will contribute 100% of proceeds from the Sentinel Olaf charity bundles and select related items to the Riot Games Social Impact Fund in partnership with ImpactAssets.

We’re honored by your continued support to drive change in your local communities and by your willingness to rally around nonprofits. We hope you continue to work with us to bring light to our world in our future social impact campaigns!

You have one ultimate, yes—but what about a second ultimate?

Viego’s ability to control the champions of Runeterra has unsealed a chaotic new game mode: Ultimate Spellbook! Choose from three other champions’ ultimates, randomly selected from a pool of 40 (listed below!), to use as your secondary Summoner Spell at the beginning of a game, then execute the wombo of your dreams all by yourself! Ultimate Spellbook opens on July 8th, 2021 at 8:00 AM (PT) in EUN, EUW, TR, and Russia, and at 1:00 PM (PT) in NA, LA1, LA2, KR, JP, OCE, and BRE, and and will run for the duration of the event, so hop on and harness the power of the Black Mist to wreak havoc on the Rift!

Not every champion’s ulti is suited to Ultimate Spellbook, so we’ve hand-picked the ones that we believe will get the most mileage. You’ll be able to choose from a random list of three ultimates pulled from this list at the beginning of every game:

Ult-ernate Summoner Spells level up as your Champion’s ultimate levels up to rank 2 and 3 (levels 11 and 16) and benefit from Summoner Spell haste.

Ultimate Spellbook wastes no time in getting you into the action!

Players start at level 3 and with more starting gold, so be sure to level up all your skills and spend that cash! Passive XP and gold are also increased, and you share some minion gold with teammates in lane. Some other objectives also work differently, like…

Mordekaiser’s old drake is back, and he’s out for vengeance. Here’s how Ultimate Spellbook’s drake works:

The Ruination has spread to all corners of Runeterra, including Ultimate Spellbook’s Summoner’s Rift! Jump in to see how the Black Mist has twisted this classic map and its denizens.