One of the Rioters working on skins is leaving LoL. And this is an incredibly significant loss.

A lot of people work on skins in League of Legends. So it’s hard to say that the departure of one of them somehow had a huge impact on the whole process. And yet, it can happen when someone like Katey goes away.

Why was she such an essential part of Riot? She was exactly the person players were turning to for skin improvements. It was her Twitter that was the most helpful one, she has been collecting feedback from the community for the last 7 years, walking around Reddit, or a forum some time ago.

League of Legends fans are currently grieving the departure of “Miss Katey Khaos”, one of the head skin designers who has been liked by a lot of gamers. As described by Reddit users, contacting her was very easy. Rioter responded to the vast majority of complaints about skins and she was responsible for the process of improving them.

It should no longer be necessary to explain why this is one of the loudest departures in recent months or even years. Next Thursday, players will lose someone who spent their days talking to players and fixing skins. It was from her Twitter that players often learned about the progress of work, plans, etc. 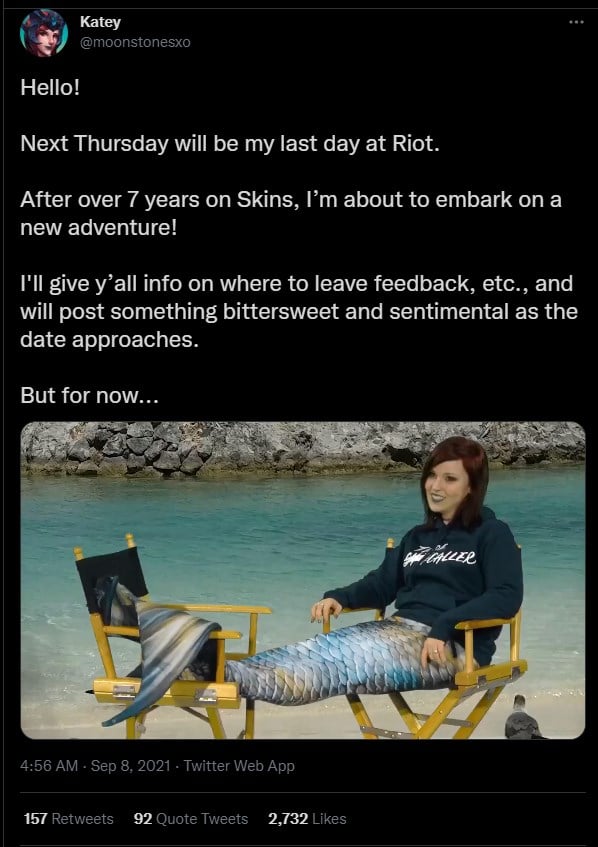 Many people wonder what the real reason for her departure is. Some have suggested that this is a lot of pressure, especially after the last failed event where most of the blame was attributed to the skins team. Others say she got a better offer and wants to keep growing. However, there is a small chance that we will know the truth, at least in the near future.