Details of the change for patch 11.14 in Teamfight Tactics.

It’s the last patch of the first half of Reckoning and we’re tidying things up before our Mid-Set, Dawn of Heroes. Be sure to get your rank up to Gold (or higher) this patch to earn the Set’s exclusive ranked emote before Dawn of Heroes brings a soft rank reset in Patch 11.15. And once you’re done doing that, you can stop sitting in the dark while listening to Radiohead and read about all the bright, new, and heroic changes in the Mid-Set Mechanic reveal! As for here, I’m not leaving you high and dry—check out the balance changes below so there are no surprises on your final grind! 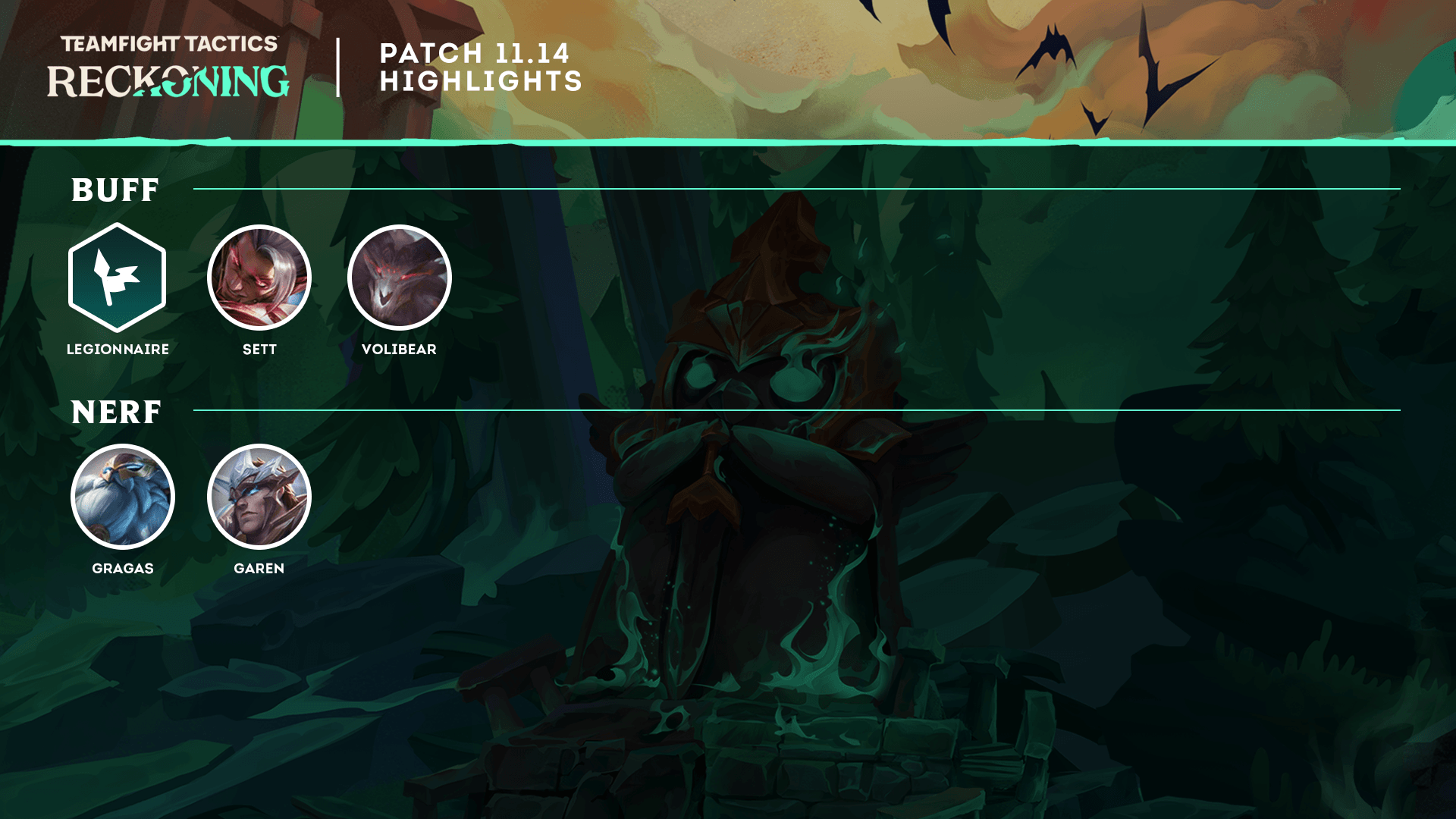 As we prepare for the Dawn of Heroes we have a smaller patch this time around. But, as a reminder we did add some balance tweaks to Redeemed and Hellion in 11.13B.

All in favor of renaming Sett’s spell to Heyyy-maker? As in, “Heyyy, wanna give me that sword over there?”

There’s a small amount of small changes that are simply smoothing out some of the edges. That being said, if you miss my writing like I miss your reading, don’t worry, there’s a whole lot more to come with the Mid-Set.

Giving some more survivability to a champion where building tank is off-Brand.

Here are some SMALL changes for large impact, or maybe it’s the other way around? Regardless, these UX (User Experience) and UI (User Interface) changes are for us to enjoy!

We have a series of Hyper Roll ranked updates that will be great for your climb to Purple Tier while maintaining the competitive integrity of the sacred Hyper Tier rank!

Dawn of Heroes dates and more

While I wish you the best in your climb as the Mid-Set approaches, I also wanted to give you the heads up on a couple of dates. You’ll see Dawn of Heroes appear on PBE July 7th. The Mid-Set will head to live servers with patch 11.15 very, very, early in the morning on July 21st. And the Pass and Store Content will activate after my third cup of coffee that day at 11 AM (PDT)!