The full description of Update 11.13 came out yesterday, which caused serious concern.

Patch 11.12 had a lot of impact on the selection frequency or winrate of the character. Rammus gained the most, close to 3% WR, while Mundo lost over 9% winrate. Now another hero appears on the horizon, which may soon be OP.

Riot mentioned a change of the meta, but lowering the cost of items can be of great importance in the case of Sylas and Kassadin in particular, of which the first is the most exciting.

READ MORE
Nocturne’s ultimate is able to disable LoL to all enemies, how does that work?

Will he be too strong?

If you’ve set Silas aside, it’s worth taking an interest in him. The character is at the peak of its popularity at this point.

He also holds up very well when it comes to the number of games won. At this percentage, the pickrate is really good, and it could be much better. All because Riot in patch 11.13 will be changing the prices of several items.

For example, Everfrost will be 200 gold cheaper, and after all, it is one of Sylas’s basic items. This was noticed on Reddit, and as a result, there were several topics that Sylas could be a huge problem in a moment.

“Giving Sylas, the most played mid laner in all elos above silver, 200 free gold despite his already absurd early game is not something needed, to say the least.” 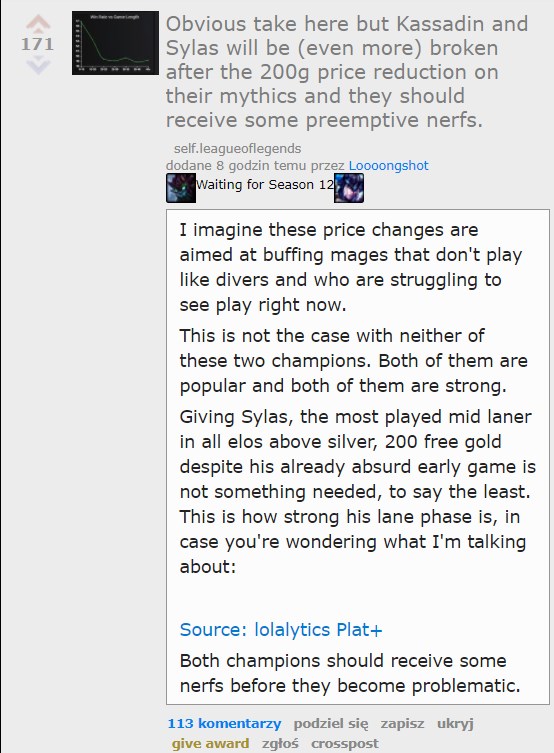 Of course, the character may be nerfed later, but for a while its popularity and% of won matches will surely increase even more. Riot has not reacted to these messages so far and it is not surprising, but maybe the studio will change its mind about these buffs at some point.