The last nerfs bury this champion once more.

In update 11.14, Riot decided to nerf a famous assassin from League of Legends. It quickly turned out that the changes had a significant impact on her win ratio. The huge decrease is directly related to the changes introduced.

Interestingly, today we’ve already got a detailed description of patch 11.15. There is no mention of Akali, who is currently one of the worst mid-lane choices. So it is confirmed that this character causes great difficulties for Riot.

READ MORE
When will LoL players learn about the developers’ further plans for the upcoming heroes?

Akali’s life has not been easy since the beginning of her stay on Summoner’s Rift. Over the years, Riot has tried alternately buffing and nerfing her, hoping she’ll be somehow balanced in the end.

After many years, little has changed, there are still situations where the heroine achieves a tragic win ratio after nerfs and becomes one of the weakest champions. It was like that now. 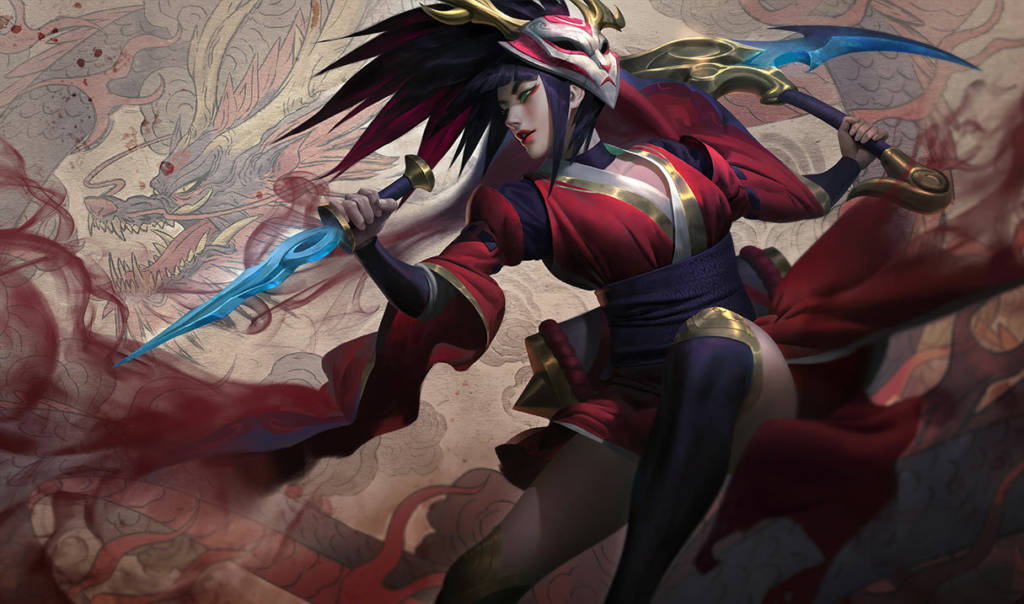 It’s worth recalling what exactly changed in Update 11.14:

The last set of changes in patch 11.6 brought Akali back in line in Average and Elite levels of play, but she’s still a force to be reckoned with in the Pro scene. With this change, she’ll be slowed down before her full burst of damage, giving enemies a chance to strike back.

These changes made Akali’s stats fall apart quickly. Today, the heroine in mid lane (her main position) wins only 46% of games in the Platinum + divisions. This is an incredibly bad result that makes her not only one of the worst midlaners but also one of the worst characters in the game overall. 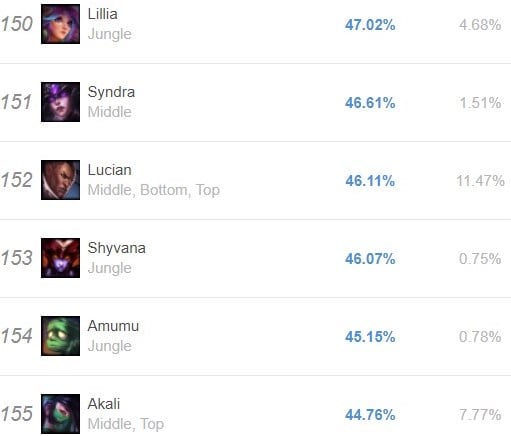 Has Riot practically killed Akali with nerfs once again? Looking at her general statistics, it can be said that yes, indeed they did. It has been known for a long time that the creators balance the game largely towards the professional stage, and the heroine was still very strong there. The changes, however, affect average players, which can be seen in the win ratio and a significant drop in pick ratio. 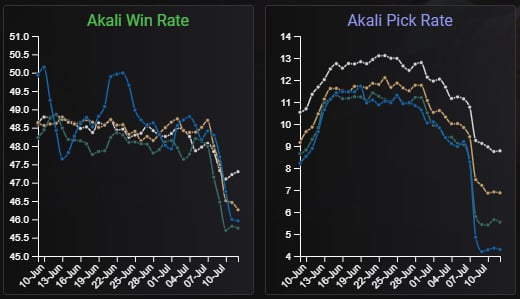 Akali has repeatedly proven to be incredibly difficult to balance, leading some players to believe she is a character who simply has a poorly designed skill set.

Fans hope that Riot will soon become interested in their favorite killer again and try to change her abilities to come even a little closer to a balanced state.