Who said Billie Eilish couldn’t have anything to do with LoL?

Yesterday, a video with a preview of the new heroine – Vex was released on League of Legends social media. The Grim Magician caused a great deal of buzz on the internet due to her interesting skill set and dark nature.

Interestingly, some noticed the resemblance to the famous artist – Billie Elish. The official League of Legends Pentakill profile even compared them.

What do Billie and Vex have in common?

From time to time, new characters whose personalities are really different come to League of Legends. Recently, a positive and well-built Akshan has been added, and now the dark and not-wanting contact with anyone Vex.

You can see the preview, skills and some interactions below:

So it’s hardly surprising that the community quickly compared her to Billie Eilish, as did Pentakill’s Twitter profile. They compared the cover of the singer’s newest album “Happier Than Ever” with splash art by Vex. 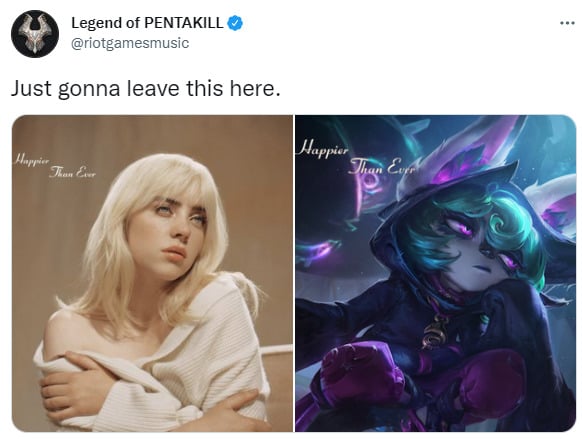 How big is the similarity? Some say they could be best friends, while others believe that any sad character can be compared to the Grim Magician. However, it was Billie Eilish that first came to everyone’s mind.