One of the players found notes from his girlfriend when she was learning to play LoL.

League of Legends is an incredibly complex game that is a really big challenge for new players. The title from Riot Games offers over 150 heroes who differ in the style of the game, skills, or what runes and items should be built for them. This amount of information can be overwhelming for a new person.

It is true that today players have a lot of facilitation in the form of many pages with guides, applications that they may have at hand during the match, or even overlays in the background that suggests items or runes.

Many years ago, new players sometimes did not immediately use the Internet but took notes in the traditional way. Some people simply wrote down runes or items quickly, others wrote down important tips and interesting facts about the characters. It also happened that some people put a lot of effort into their notes, decorating and embellishing them.

One of the players found his girlfriend’s old notebook. What it contains captivated the community.

A player with the nickname Morbid1337 wrote that while cleaning the garage he found his girlfriend’s old notebook from around 2014. As he noted – two years after getting to know each other, his partner decided to try playing LoL and as it turns out – she noted the information collected in the game in a creative way.

I was already playing League of Legends for about year when we met, and 2 years later she started playing as well. Today when I was cleaning old stuff from my garage, I found her book of “League Builds” in which she would write down skill order, itemization and all the good stuff I’m sure most of us did when we first started. For newer players, you have to realize we haven’t had huge variety of information related to league, such as phone apps etc.

The player also wrote about fond memories that came back when he was looking through the notebook.

Sometimes during an ARAM game, she would dial my number and ask “What do I build on Quinn in ARAM?”. Good times

But returning to the notebook – what does it look like? The player posted an example page where you can see that the girl not only printed the image of the champion but also drew tables in which she noted the order of maxing skills. 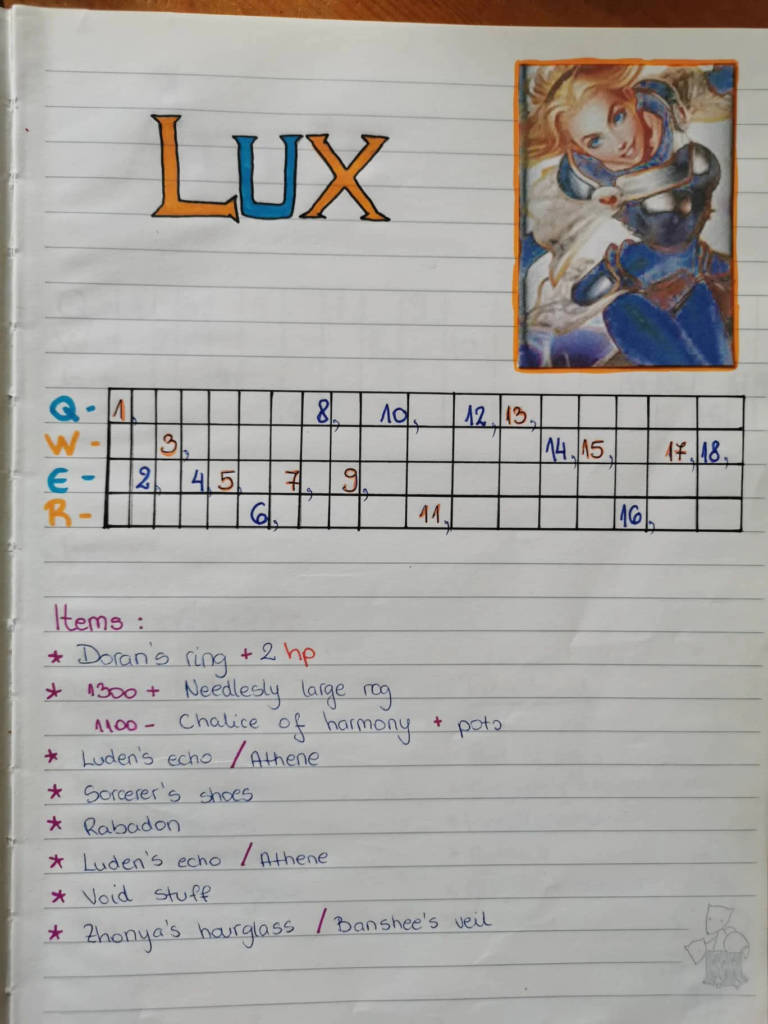 Although for many people nowadays writing down such things in an aesthetic way seems to be a waste of time (especially since the information about them can be found in a few seconds), it must be admitted that a notebook of this type from 2014 is an amazing souvenir evoking many memories.