The players got to know the dates of the next Clash tournament. This time the fight will be for the Shurima Cup

Clash is another form of gameplay where League of Legends players can measure their skills.

The formed team can take part in a series of games against opponents of equal level and depending on how many games they win, their members will be rewarded with icons, banners or skin shards.

When will players be able to play Clash?

Riot announced when the next Clash tournament will take place, and a tab appeared in the client containing the necessary information and allowing you to assemble your team.

Get ready to Arise! with your team, because this round of Clash is Shurima themed! The first weekend will be April 17th and 18th, and the second will be May 1st and 2nd. Team formation for the first weekend open on April 12th. 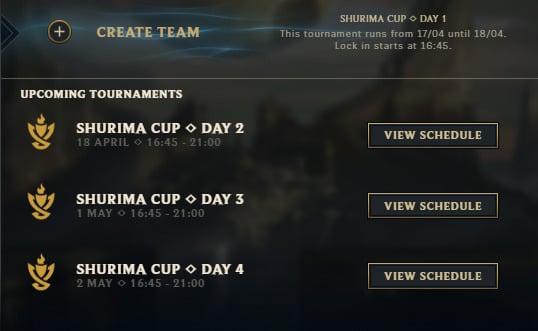 Below you can see the times in which the games of each tier will take place.

You’ll need a ticket to enter Clash. One ticket lets you participate, but if you’re confident, a premium entry is available for five tickets. Each teammate chooses their own ticket entry and their individual rewards scale off that. Once your basic or premium entry is set (when your full team locks in before a match), your entry can’t be changed.

In order to be able to take part in the competition, the player will need to purchase a special ticket. This one can be purchased in the store for 990 BE or 195 RP in the basic version, or for 975 RP in the premium version.