What applications did the players find for the game elements that apparently should not pose a threat to other creatures?

Minecraft is a game in which you can find a lot of mechanics and blocks. Although many of them were created for a specific purpose, players are constantly discovering new possibilities related to the selected items. Some of them may therefore turn out to be deadly, even though they initially did not appear to be so. You can find a list of just 10 such things below.

Stalactites are objects that were added to the game in Update 1.17. This pointed stone that hangs from the ceiling can injure a player who is under it when the block falls for some reason. A player with the nickname Nuclear_Cyborg decided to use this mechanic and created a stalactite launcher that throws them using the redstone mechanism.

Minecraft boats found a number of new applications, although initially they were intended only for faster movement in the water. Players use them to move mobs and imprison hostile creatures in them, but that’s not all this item is capable of. It also allows you to create a very simple enderman farm. Just create a small canopy two blocks above the surface, stand in the middle and surround yourself with the boats.

This way, endermen that the player looks at will get stuck in the boats and slowly die from damage received from being stuck in the wall.

Fireworks have many uses, the most popular of which is by far propelling the player using elytra. However, many players do not realize that properly manufactured fireworks can help in the fight against the toughest opponents, such as Wither.

ALSO – When Minecraft really doesn’t like you. You must be extremely unlucky, but it is possible

The half-block is a highly appreciated item by builders. In many cases, it gives building more character and helps players to ensure that the building has the best possible shape. However, few people are aware that this block can be used to hurt someone.

When pouring water on a properly placed half-block, it will not appear on it, but under it. What does it mean? It will no longer be possible to jump from a great height and avoid falling damage. However, the player will not be aware of it until the moment of a hard landing.

The cauldron is a relatively rarely used block due to its small number of uses. However, the honey block, which makes jumping significantly more difficult, allowed to create a deathtrap from the cauldron. It is enough to place a cauldron filled with lava on the aforementioned block, and the player who falls into it will not be able to get out of it. 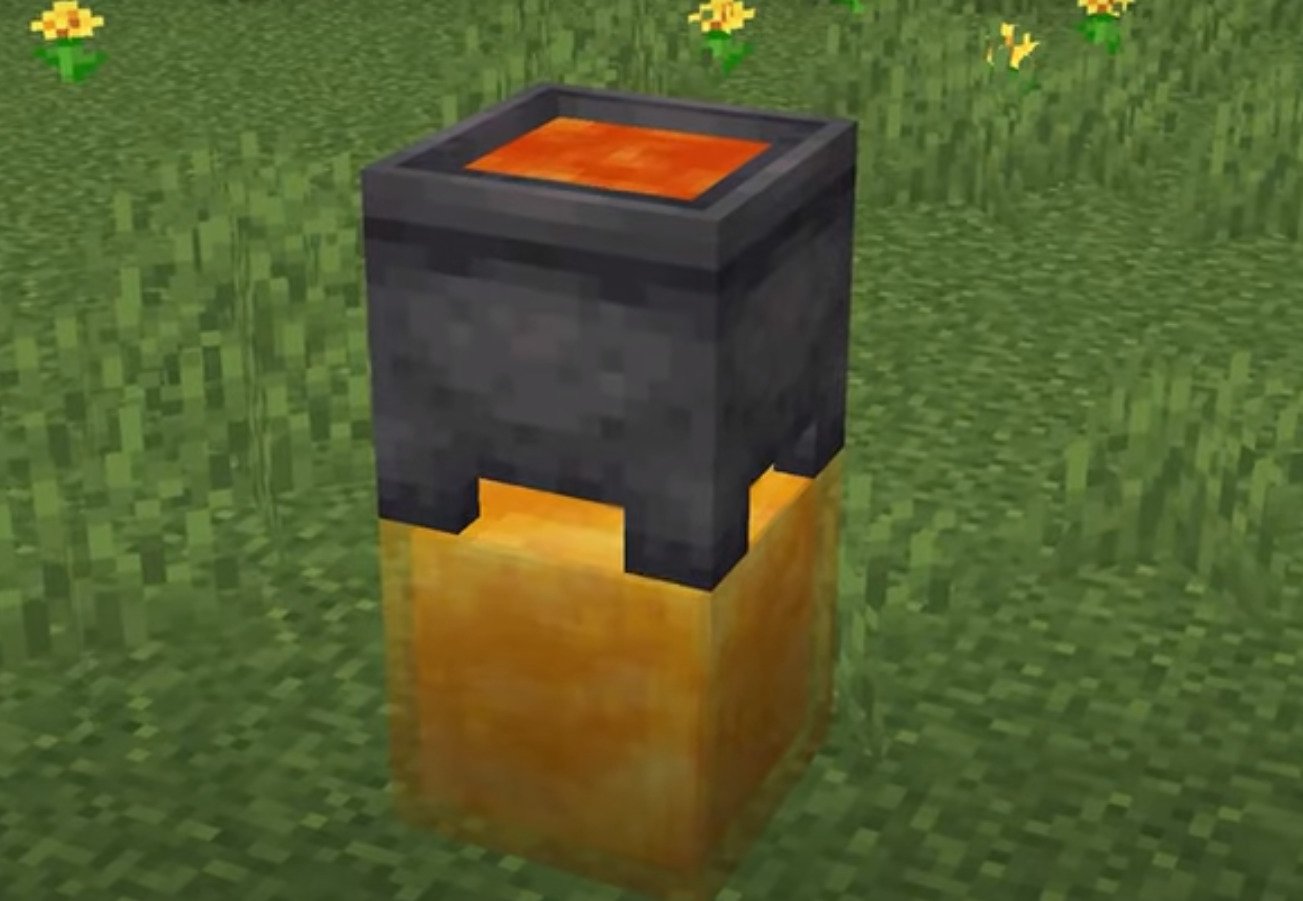 Most players seeing a pressure plate in a suspicious location begin to expect some sort of danger. But what to do in a situation when stepping on it does not do anything? The player very often decides to destroy it, which can have a really unpleasant result. The trap activates when a broken tile is placed in the funnel underneath. The redstone signal can be used in many ways. From flooding a room with lava to a TNT blast.

A minecart with a hopper

Minecraft has one hidden mechanic that is used to prevent situations where there are too many objects on one block. It can be easily used to deal damage to mobs. It is enough to put a lot of minecarts with hoppers in one place, and then make the mobs fall into the hole.

Minecraft water lifts are one of the most used and best ways to move up and down inside the mansion. However, they have a certain property that can be used to the disadvantage of the player. Projectiles can float on the water, which can deal damage when they come into contact with the player. When enough arrows are collected, the amount of DMG can be quite a lot.

The pufferfish doesn’t have many uses. The only thing it can be used for is creating potions that allow you to breathe underwater. The player can also eat it, but he will be poisoned as a result. However, players have recently found a way to create a trap in which the pufferfish deals damage.

It is enough to make a shallow water tank, cover it with flaps, and then let a large number of these fish into it. Any player who walks over these flaps will take damage and be poisoned just like in direct contact with the pufferfish.

Even though the turtle egg is seemingly a completely harmless element, it can be used to create a trap. When the player jumps on the egg, there is a good chance that it will be destroyed. It is enough to cover them with a carpet to make an unsuspecting person fall into the abyss at the time of landing.