What are the new hills in Minecraft? You can test them right now in the Bedrock version!

Despite the fact that there is no next snapshot this month, the Minecraft community can take a look at the brand new mountains system. It has officially hit the game’s test Bedrock version.

The cave-related news introduced in the latest snapshots has somewhat overshadowed that the new update is also to improve the mountains. How will they look like?

In the official entry, we read that the latest test version introduces several variants of hills to Minecraft.

Pack your inventory with rations and a solid pair of leather boots because there’s a new landform to explore in the latest version of our Bedrock Beta: cooler, taller mountains. That’s right, mountains are now exactly 271% more majestic, but also 184% more dangerous. Not only can you fall from greater heights, but you still have to watch out for powder snow and goats! At least the view is worth it? Unless you’re like me and the mere thought of extreme heights makes your palms sweat.

There’s more to these mountains than their imposing heights – they also have their own sub biomes, including lofty peaks, snow capped peaks, snowy slopes, mountain groves, and mountain meadows.

To see the new mountains for yourself, when creating a world, select “Caves & Cliffs” in the experimental features tab. 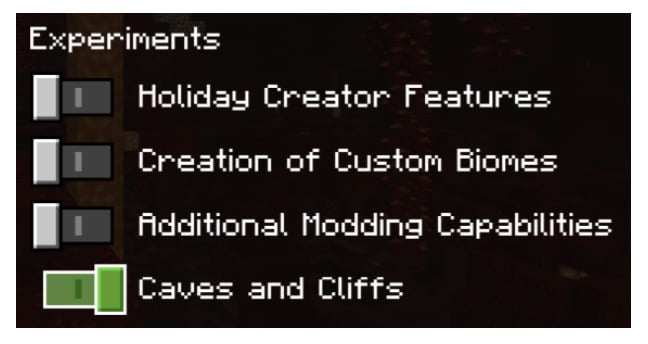 Due to delays of the next snapshot for the Java version, new mountains will probably be available next week.​