Blizzard provided the media with very interesting information about Overwatch 2.

The Overwatch League spokesman has confirmed that the league’s fifth season will begin in April 2022. This information is important, but much less groundbreaking than reports by media such as “The Washington Post”.

Information directly from people responsible for OWL is a direct response to rumors suggesting longer or shorter breaks in the competition. 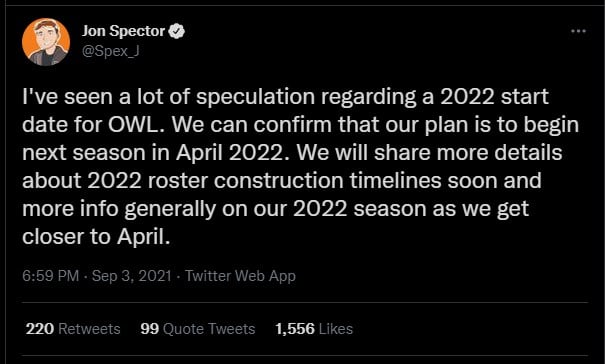 A league played on Overwatch 2

The surprising news is that players in the fifth season will be competing on the early Overwatch 2 build. Although the Twitter entry itself does not say it, OWL spokesmen were to provide such information directly to the editorial office’s e-mails. The Washington Post, mentioned above, writes about it.

At the same time, this does not mean that the premiere of Overwatch 2 will take place in April 2022. Thanks to this, it is known that Blizzard is closer than further with its works and will be ready to try Overwatch 2 in 2022.

This is definitely good news, especially with recent rumors that suggested Overwatch 2 could arrive in 2023. Here, however, it was the private opinion of a “leaker” known as Metro.