Riot decided to skip the May update of Valorant. Patch 2.10 has been canceled.

From the very beginning, Riot Games introduced new updates to the game quite regularly.

For this reason, it is quite a surprise that the developers decided to skip the May patch, which would update the game to version 2.10. Everything the developers planned will go to the game with update 2.11.

What was the reason for canceling the May update?

The developers decided to abandon the 2.10 patch due to the game engine update. As they explain: 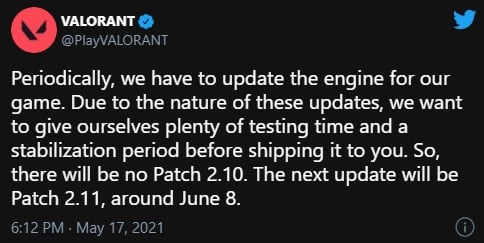 Simply put, the developers want to update the game engine and wait with the changes so that everything fully ready. It seems to be a really good choice as there aren’t many pressing problems in the game right now, so it’s better to do everything calmly and thus not spoil the gameplay for players by generating nonsensical errors.