In any FPS, an important issue is the smooth operation of the game and the lack of any stuttering that destroys the comfort and can spoil many actions. As a result, the developers are trying to optimize every nook and cranny of the map so that it doesn’t drop frames.

However, there are still situations where even a good computer cannot cope with maintaining FPS. One of Riot Games employees decided to answer this and a few other questions.

READ MORE
New cinematic from Valorant, what else is known about lore?

A question of performance

Questions from the player: What are you doing about performance? Why is my Frames Per Second (FPS) unstable sometimes?

VALORANT has an entire team dedicated to maintaining and improving the performance of the game. In VALORANT, lower spec machines tend to be GPU bound (rendering is the bottleneck for your FPS), whereas mid to high spec machines tend to be CPU bound. Because many of you are CPU bound, adjusting graphics settings may not help performance because the CPU is limiting FPS, not the GPU.

Maintaining performance involves setting budgets (data, not finances) for new content that is added to the game, such as maps, characters, and modes—as well as monitoring client and server performance internally across a variety of specs prior to a patch, and externally once a patch is released. This allows us to either catch an issue before release or, in the worst case, track down issues that you are experiencing in the live game.

Currently, we are focused on improving CPU performance. This can be done by either improving baseline performance, which results in an average higher FPS or by removing hitches, which will reduce how much FPS drops when there is a more expensive workload.

We’ve identified issues with Viper and Astra and will be working on optimizations to their abilities over the next few patches. We will be doing a pass on performance for all Agent abilities over the coming months. The overall goal is to increase the lowest FPS you see regardless of what is going on in a match. We are also working on VALORANT’s ability to make use of multithreading to better leverage modern CPUs.

FPS can seem unstable at times because of how rounds play out. Early parts of the round are spent gathering information and watching fights between a fewer number of players. Later in the round when players are attacking or retaking a site, we tend to see many bodies fighting each other and increased ability usage, all of which can decrease FPS.

Additionally, performance can vary between modes. For example, performance on the Shooting Range is often high because there is only one player being simulated. Deathmatch can see worse performance than the standard Unrated/Competitive modes because there are more players in Deathmatch and most of the game is spent fighting each other.

If there’s one take away for you it’s this: Whether you’re on the latest hardware or VALORANT’s min spec, we want all of you to be able to focus on playing the game and not fighting performance. 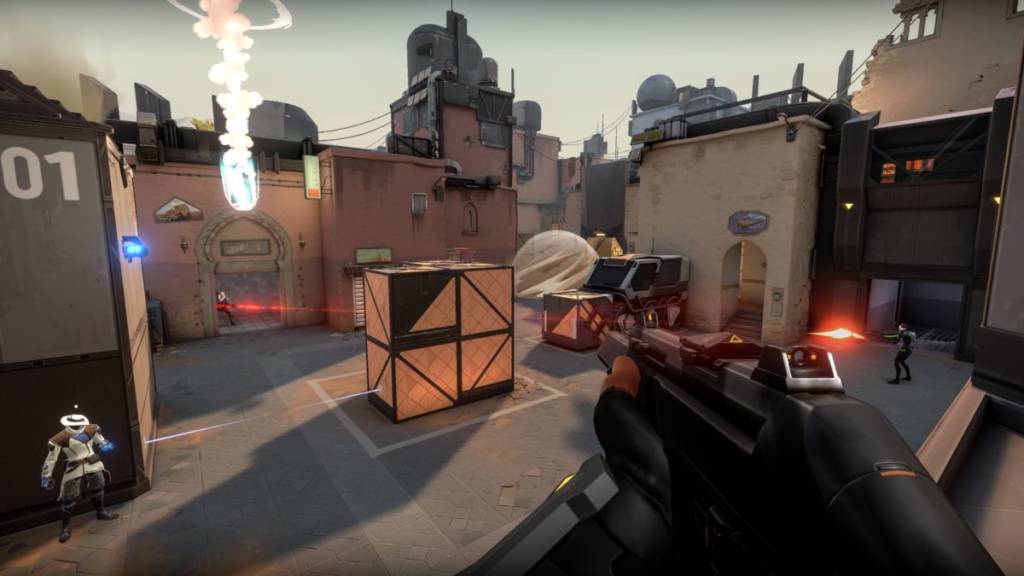 Questions from the player: When’s 5-stack coming back?

We’ve heard the feedback, and we agree that VALORANT is at its best when played in a group. We have two ways we are thinking about this space:

When thinking about the first question, we have significant concerns regarding splitting queues. We don’t believe splitting the queue—or doing a flex queue—is the best solution for VALORANT. We fear that one ranked queue would become “The Real Ranked Queue” and the other queue becomes less prestigious.

Our other concern is match fairness. By having one ranked queue, we have a bigger pool of players lowering queue times and enabling stricter matchmaking. So while designing for this issue, we want to make sure whatever solution we go with maintains competitive integrity.

For the second question, we are excited to announce…. Oh hey, Hiko posted a video with ranked feedback. Yeah, I need to go watch this. Sorry! I can tell you more at the beginning of Episode 3, as it’s a little early to talk about what we are doing to solve that issue.

Crabs on the Breeze map

Additionally, the Rioters decided to answer a question from player Freddiepon, who asked why the crabs cannot be eliminated on the Breeze map:

The crabs on Breeze have been living and breeding near some Radianite fallout and have likely developed fortified exoskeletons. We advise against any crab battles, unless you’re prepared to lose an eye. Doesn’t matter much anyway, within a few years time they’ll probably take over the island. But I’m no crab expert.