Valorant developers have commented on the ranking system.

The Valorant community is demanding quick and effective improvements to the Ranked Mode from developers, which has recently come under fire from players.

Players have made a lot of allegations about matchmaking, which were answered in a long post by senior competition designer Jon “EvrMoar” Walker.

What is Riot’s position on the allegations?

The main complaints of the players are problems with matchmaking, the lack of various functions that seem very necessary, or the ranking system. In one of his Reddit entries, the developer took the time to discuss a few issues that worry the gaming community.

There is no such thing as a winners/losers queue for today in Valorant. [Players] are still convinced that the ranking games are broken because of something that wasn’t true. It’s a vicious circle in any game with a ranked system. [Valorant] is not as bad as people think.

We check data, read player feedback on social media, research players directly, and constantly monitor the status of the ranked queue. (…) The ranking will always require updating in our eyes. 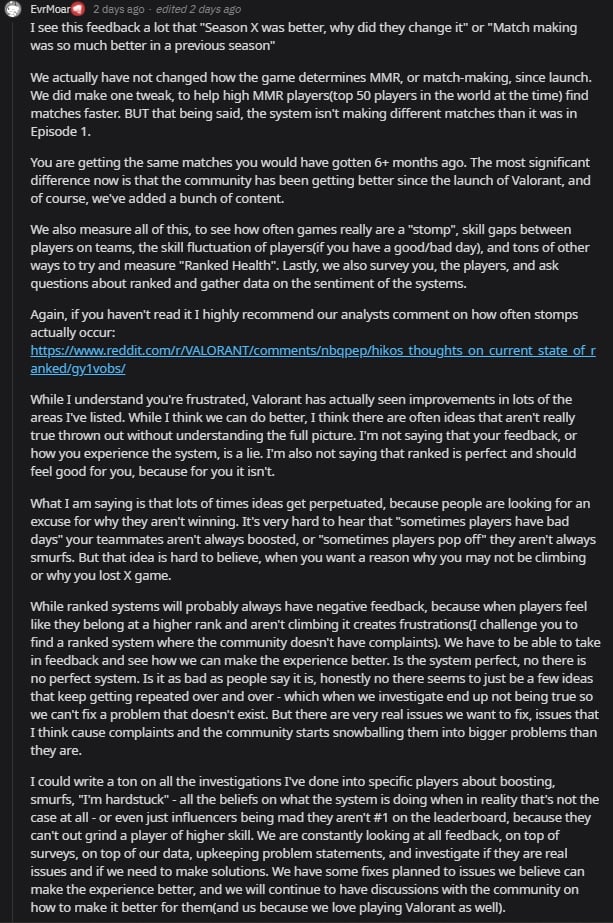 As you can see, the developers realize that the ranking and matchmaking system should be constantly improved, but in his opinion, some of the players’ claims are simply inaccurate. It only remains to observe Riot’s further decisions, as it is certain that the matches will begin to change.