The Valorant community wants developers to fight toxicity much like Overwatch.

Toxicity is one of the biggest problems of FPS games. This problem also affects Valorant and Overwatch, but in the latter of these games, the problem is slightly milder. This state of affairs exists because of an interesting rating and praise system that the Riot community would love to see in Valorant as well.

What exactly are Valorant players proposing?

One streamer suggested on his social media that Valorant take the example of its competitor, Overwatch, and use a similar system to combat toxicity. Specifically, we are talking about the opportunity to praise players for being a “good teammate” or “sportsmanship”.

In this way, players with more praise could be matched by the number of positive ratings. This would be similar to the “trust factor” in CSGO. Of course, this method does not completely solve the problems with toxic players, but it allows you to create slightly better queues, thanks to which the game will be more enjoyable for a certain group of players. 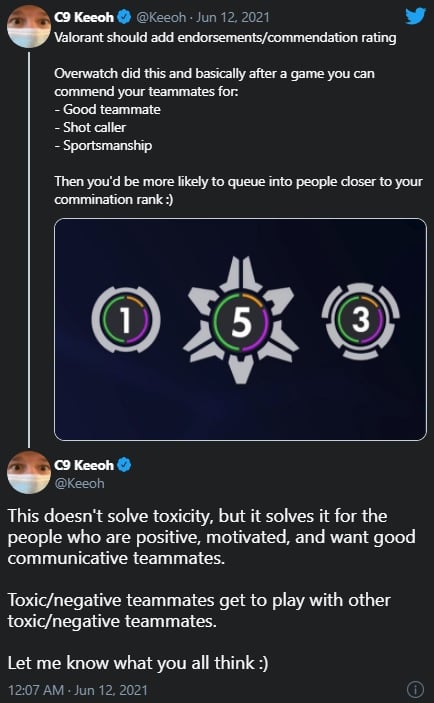 Lots of people supported this idea because players with a negative attitude towards others are commonplace in Valorant and many other FPS. Such a solution could slightly ease the whole problem and make the gameplay more enjoyable.

People who play OW on a daily basis know perfectly well that this system is good, especially in theory. In practice, after a few months, people stopped paying attention to it.